Why history needs a place at the negotiating table
​
​Israeli and Palestinian leaders have been tragically successful at demonizing each other, often using history to do so. Peace-making requires just the opposite.
By Pierre Hazan | Aug 1, 2013 | op-ed originally published at haaretz.com 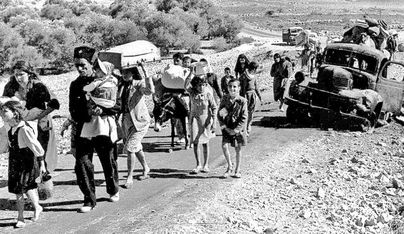 The negotiators of the revived peace process should be careful not to not make a clean sweep of history as they move forward. However, they will, in all likelihood, do just that. With the consent of the Israeli government and the Palestinian Authority (for once, in agreement), the U.S. will carefully avoid pressing historical issues. They will be following precedent, as Israeli diplomat and Oslo negotiator Uri Savir once summed up: “Discussing the future means reconciling two rights, not readdressing two wrongs.” In the pragmatic logic of peace-making, this approach is understandable: Why further complicate a conflict whose resolution already seems all but inextricable?

​Because the interpretation of history by both Israelis and Palestinians (leaving aside the more extreme forms of nationalism) has structured each side’s view of the conflict. These conflicting memories necessarily complicate any settlement. How can we set aside the fact that the expulsion of hundreds of thousands of Palestinians in 1948 plays a decisive role in resolving the conflict? How can we ignore the fact that half of the Israeli population comes from the Arab world and that their vision of the conflict has been deeply influenced by the historical experience of their parents or grandparents? How can we not see that just these two facts, let alone when joined by many others, reinforce the feeling of victimization by the other side among both Israelis and Palestinians?

The lesson of the last 20 years of transitional justice and conflict resolution is this: Humanizing the enemy opens new space for dialogue. Avoiding history leaves empty space, and such space acts as a magnet for extremist ideologies. From South Africa to the current peace process in Colombia, NGOs and civil society have played a key role in breaking the cycle of violence. To choose to ignore the burden of history, as the American mediators are likely to do, or to use history to demonize the adversary, as do the respective parties, is an additional danger on the road to an already difficult settlement.

This conundrum exists in almost all wars and national struggles, but particularly so in the Israeli-Palestinian conflict. There is, of course, the symbolic weight of the holy places, especially the Temple Mount / Dome of the Rock. But beyond religion as a tool to legitimize territorial claims, the difficulty of negotiating peace is reinforced by the fact that each side feels morally superior to the other. Israelis are seen as “usurpers of land” and Zionism interpreted as a discriminatory, even racist, colonial ideology; while the Palestinians are seen as potential perpetrators of genocide, reverting to the weapon of “terrorism” due to their lack of power. The tragic merit of both the Israeli and Palestinian leaders has been their success at exporting their viewpoints, with additional radicalization coming from abroad. Both sides share a mirror image of demonization of the enemy.

The initiative taken in 1999 by then Education Minister Yossi Sarid- and renewed in 2007 by his successor Yuli Tamir- to use the term Nakba in Israeli school textbooks, indicating that it represents an “alternative account of the 1948 war”, was a move towards the humanization of the other side. Unfortunately, Minister of Education Gideon Sa'ar subsequently disappeared the Nakba from the textbooks.

This playing of the nationalist card has consequences: It fans the flames of identity passions on both sides, weakens students' exposure to the Arab world’s interpretation of the Israeli-Palestinian conflict and their capacity to discuss this, and unnecessarily offends Arab Israelis who make up 20% of the population. Fortunately, the new Minister of Education, Shai Piron, is examining lifting the ban on the use of the term Nakba, saying that Israeli students have everything to gain  from a better understanding of other perspectives than their own. Let’s hope he goes all the way.

Peace cannot be achieved without the buy-in of all parties concerned; and this buy-in requires at least a minimum of recognition that the opposing party’s claims are legitimate. NGOs and civil society have a crucial role to play in preparing hearts and minds as politicians here simply do not seem willing to will not deal with these hard-core issues related to the past.

Counter-intuitive as it may sound, peace-building must precede, then accompany, peace-making.

The future will tell whether the Obama administration’s attempt to reopen the peace process will or will not be successful in an environment as volatile as the Middle East today. The only certainty is that the dehumanization of the enemy is one more, and heavy, obstacle to the pragmatism needed to reach a negotiated solution.

Serious transitional justice projects, both within the system, such as in schools and courts, as well as managed by NGOs all have a role to play in the slow and difficult process towards recognition of “The Other”.

Pierre Hazan is lecturer at the Geneva Centre for Education and Research in Humanitarian Action (CERAH) and a guest lecturer at The Fried-Gal Colloquium on Transitional Justice at Hebrew University’s School of Law.
<< Back to Why Transitional Justice
Contact us at: info@jygal.com​
​We are not accepting  proposals at this time.
(c) 2019 Gal Foundation,Inc.​